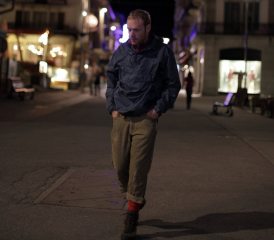 Rock Climbing in Ireland documents the best of Irish rock climbing.  It details over 400 classic climbs spread across 22 crags in some of Ireland’s wildest, most beautiful coastal and mountain areas.  With routes from Diff to E9 there is plenty for all climbers no matter what their ability and taste.

This is a greatest hits of Irish climbing.  Ireland is not going to trouble the likes of Spain or France for the top spot of Grandest Climbing Destination, but it does boast a wide variety of rock types and a unique atmosphere for the trad climber.   And contrary to widely held belief, it doesn’t always rain there.

There hasn’t been a general climbing guide covering the island of Ireland as a whole, for nearly thirty years, so this fills an important gap for both the visiting climber and the road-tripping Irish enthusiast.  It does what it sets out to do superbly.  The images and descriptions are clear and the whole package is beautifully presented.

Starting clockwise from getting off the boat in Dublin, the guide visits all of the main blockbuster venues that a visiting climber should visit.  From the convenience of suburban cragging in Dalkey through to the Jewel in the Crown: Fair Head, this has everything you would need for a climbing road-trip encompassing the four corners of the country.   Some of these venues have not been featured in any previous guidebooks.  These are the first full colour topos covering areas such as Coumshingaun and Dún Séanna Head.  Those areas that have appeared in pre-existing guides are similarly superbly documented.  Author David Flanagan has clearly consulted widely and travelled the length and breadth of the island to compile the list of climbs and crags featured, the result is genuinely authoritative.

There is a great range of beautiful action shots showing Irish climbing at its best.  The cover features one of the most recent high standard new routes (The Second Coming E7. Owey Island, Donegal) put up just before going to press.  Not every inspiring line featured is so hard.  In fact from single pitch cragging to multi-pitch mountain routes - there is a good range of difficulties and styles.

The layout is generally easy to follow, there isn’t too much page turning between topo’s and route descriptions.  The routes are clearly described and marked, the descent routes are well described.  The style is clean without symbols, star ratings etc; the author’s intention seems to be that if it’s included, it’s worthwhile.  The maps are simple and generally easy to follow.  Maybe it would have been useful to have the name of the crag on the bottom of the colour picture pages as well as the description pages, but that is my only minor criticism.

This book is thoroughly well researched and has the feel of a real labour of love by the author, Dave Flanagan, the man behind three Rock Books (Bouldering in Ireland being the sister publication).  The standard guidebook form will fit in the top of your pack without any difficulty.

This guidebook has set a standard of Irish climbing guides.  If this doesn’t inspire you to climb above the atlantic waves on the perfect limestone of Ailladie or pit yourself against the largest continuous expanse of climbable rock in the entire British Isles at Fairhead, then nothing will.

As Alan said in his roundup of the pick of the books of 2014, Rock Climbing in Ireland: “..did the pre-requisite of any guidebook - it made me want to go and climb there”.