Share
Reviewed by Adrian Berry 27th May, 2014
This has been read 31,770 times
Brands: Climbing Technology
Share
We receive free products for review from brands, many of whom advertise on the site. We work on strict condition of editorial independence, and no guarantee of endorsement 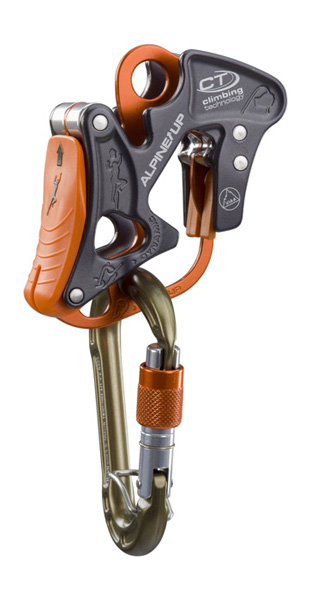 Many years ago I found myself sharing the base of Chee Tor in the Peak District with a young Pete Robins and Ben Bransby. The first I knew that anything was up was Pete calmly calling over to me and (very much in the style of Monty Python's African Tiger sketch in The Meaning of Life) asking - if it wasn't too much trouble - whether I could give him a hand as he was in a spot of bother. I quickly learned that Ben had just fallen most of the length of Ceramic Extension because the skinny ropes they were using had been offered very little resistance by Pete's old ATC and he had lost much of the skin from the palm of one of his hands and he needed me to feed the rope through.  It was a classic instance where an auto-locking belaying device would have saved a good deal of unpleasantness, but auto-locking double rope devices have been conspicuous in their absence - until now.

Last summer, a coaching client of mine told me that he was looking to go trad climbing with his teenage daughters. Now, he's a big guy (all muscle, of course) and when on the end of a couple of skinny half ropes, one's belay device has to work pretty hard to hold the ropes still.  He asked what I thought of the CT Alpine Up so I got a hold of one to take it through its paces and pass judgment.

The Alpine Up is an auto-locking double rope belay device with virtually no moving parts. It boldly claims to be 'the most complete and versatile belay / rappel device ever produced'. It offers auto-locking function for double half ropes (7.7mm to 9mm), auto-locking function with a single rope rope (8.9 to 10.5mm), and guide mode for bringing up two seconds - naturally with auto-lock function. For belaying lead climbing, the device can be set up to behave without auto-locking - allowing for a more dynamic belay on trad gear. It comes complete with a screwgate karabiner which is designed to be used with the device, and the device should always be used with this karabiner.

Being made in Italy, what better place to test it out than Val di Mello? I had a week out there with the device and got to use all its basic functions.

Although it looks bulky, in direct comparison its volume is the same as a Grigri or Eddy - but a bit bulkier than a Grigri 2 or a Trango Cinch. It is of course a fair bit bulkier than a more traditional double rope belay device such as the Reverso / ATC. In use, racked at the back of my harness, the bulk wasn't an issue at all.

It weighs in at 175 grams - that is just 5 grams more than a Grigri 2 and less than half the weight of Edelrid's Eddy. Though when compared to something like a (non-auto-locking) Reverso 4 (59 grams) it does present an obvious weight penalty. In use, the routes I climbed with the Alpine Up weren't terribly hard, and I wasn't concerned with carrying an extra 100 grams, though I can see that if I was going super-light, I would probably trade the auto-locking performance in favour of a lighter device.

The first use I put the device to was as belaying single pitch sport routes on a 9.2mm single rope. I like auto-locking devices which behave like non-auto-locking devices when it comes to freely paying rope out and I was impressed by the ease with which rope could be paid out quickly without annoying accidental locking. The auto-locking function was fall tested and passed with honours. Lowering off was a simple matter of re-orientating the device, and I quickly got the hang of it. It isn't as good as dedicated single rope devices like the Grigri and the Eddy when it comes to quickly switching between locked and released modes, and so for working routes I'd use a more suitable device.

I took the device up the Val di Mello classic link-up of Risveglio di Kundilini and Luna Nascente. The first use I put the device to on double ropes was bringing up my partner. On multi-pitch routes I've always been a fan of the 'guide' devices which allow you to multi-task safe in the knowledge that the device will lock should your partner take a slip. After a bit of head-scratching, and slightly regretting I hadn't paid more attention to the instructions, I managed to set up the device in guide mode, and it worked just fine. I didn't get to test the facility to lower whilst in guide mode by adding a karabiner, but I can see how this would work quite easily, and gives the device a real advantage over the competition.

Lead belaying with two half ropes was excellent. The ropes fed through easily and if you're used to a non-locking device there isn't any difference for most of the time. The auto-locking was tested when my partner popped off a foothold on the third pitch of Luna Nascente. It reacted faster than I would have - the first I was aware that she was off was hearing the device click into the locked position. I had been curious as to how the device would handle the situation where just one rope was loaded - this was exactly the situation, and it locked just fine. Releasing was a matter of lowering until the weight was off the device, then 'clicking-up' the device to fully release the ropes.

The instructions state that when used with anything other than bolts, the device should be operated in 'dynamic mode' where it will not auto-lock. I think that most users will use their own judgment as to whether it is safe to use the device in click-up mode - I personally would have no worries about doing so where the protection is sound, there is plenty of stretch in the ropes, and the belayer isn't fixed to the spot.

We ended up abseiling off from a few pitches up Luna Nascente, and so I got to use the device in abseil mode. Initially with 100m of rope hanging, there is a lot of friction, which makes decent slow, and with fat old ropes it's actually quite hard to move. The advantage of the device here is that you don't need to back it up with a prussic as the auto-locking is built-in. Neat.

With all belay devices, there is a period of learning. The more familiar you are with another device, the more awkward it feels to use a new one. Despite the clean diagrams on the side of the device, in use it took me a bit longer to work out where to feed the rope in and where to put the karabiner(s), which was a bit frustrating, but this is to be expected, and I'm sure in time it will be just as quick to use as my trusty old Reverso.

The device comes into its own on multi-pitch routes where it takes the place of carrying two devices - one for going up with an auto-lock, and one for coming down on two ropes.

I can see the immediate appeal of this device to someone who has a real need for an auto-locking double rope device, perhaps because they climb with an inexperienced partner, or a partner who might struggle to hold a fall.

It isn't going to entirely replace smaller, lighter, less functional devices, but it definitely has a sizeable niche all to itself, and I have to agree with the claims made by the manufacturers that this device really does do it all.

Climbing Technology New Click Up Colours and Tuner I Lanyard

The Climbing Technology Click Up is one of the most popular belay devices on the market. Spring 2022 sees the introduction of three new colours.

Had a fall - ClickUp concerns GriGri or ClickUp?
Buy Now from...

DaveR
27 May, 2014
"but auto-locking double rope devices have been conspicuous in their absence - until now" or since the mega jul... How does it compare to the mega jul? I've given up with mine as it is a pain to abseil with. And I found that if the climber was only weighting one half rope it wouldn't always lock. Does this happen with this device?
Robert Durran
27 May, 2014
Read the review!
DaveR
27 May, 2014
I did, but a bit too quickly :)
HeMa
27 May, 2014
Well, to be honest, Alpine Up has been on the market since 2012, where as Mega-Jul just come out last fall.
jimtitt
27 May, 2014
Adrian just hasn´t been looking that hard, I can think of a few and used one of them as well (TRE Sirius). There are a series of tests from the DAV where the circumstances where the current generation of devices don´t autolock are given. It´s worth pointing out (suprised the review didn´t:-))that the official term for autolocking is Manually Assisted Locking and the Alpine Up is not certified as this, only as a manual device same as an ATC. The Alpine Up is certified as conforming to EN 15151-2:2012 type 2 (which should read prEN... as it it not yet approved and may well not be). The -2 means it is a manual belay device and the type 2 means it is for both belaying and abseiling without a friction adjustment mode. The GriGri on the other hand is prEN 15151-1 type 6 which is a Braking Device with Manually Assisted Locking (the -1) and the type 6 tells me it is for abseiling and belaying but has no panic locking element. And before anyone tells me theirs has always locked the Alpine Up, Smart, MegaJul et al will never pass the certification test. The only ones that do are the Grigri and Edelrid Eddy.
More Comments
Add Comment
Loading Notifications...
Facebook Twitter Copy Email