Share
Reviewed by TobyA 14th November, 2013
This has been read 17,005 times
Brands: Edelrid
Share
We receive free products for review from brands, many of whom advertise on the site. We work on strict condition of editorial independence, and no guarantee of endorsement

In this review father and son team of Toby Archer and Olli Archer review two harnesses from Edelrid. Toby takes the Edelrid Orion through its paces, and his son Olli tests out the kids harness the Finn.

I’ve always thought my car was great; comfortable, safe, unfussy - it gets me and my family to where we need to go with no stress. Then, whilst on a holiday in Australia, a fantastic mate lent us his car to save us needing to hire one. His car was great too, essentially little different from mine except for one minor detail - it had a USB socket allowing me to plug my iPod in. As a big listener to podcasted radio when driving, this was a revelation after years of fiddling with one of those annoying little transmitters you attach to the iPod to get it to play via the car radio. Ever since, that one little USB plug has made me notice what my car doesn’t have and not what it does: silly, yes, but that is the human condition for you. So I will start by saying all the things that make the Edelrid Orion a great harness, then finish with a moan about what is missing for me because, if like that USB plug, you hadn’t had those feature before you might not miss them on the Orion in the slightest.

Edelrid have clearly designed the Orion with comfort in mind - with its wide belt and leg loops it looks rather like some US-made big wall harnesses. But with the interesting “3D-Vent Technology” Edelrid have kept the weight down to reasonable 414 grams, similar to other fully adjustable harnesses. It isn’t super-lightweight, nor does it pack down to a tiny package like some modern harness designs, but the trade off for this is that it is super-comfy to wear and particularly to hang in; indeed on semi-hanging stances or whilst abseiling I think it is the most comfy harness I’ve ever used.

When you look closely at the Orion you see that rather than one strip of webbing providing the structural basis of the harness, Edelrid have split the load between numerous thin lines of nylon tape, and these are spread out over wide padding. The padding itself is a matrix of holes and these allow really good breathability under the very wide leg loops and waist belt. One friend even asked if the leg loops were too wide and if they rubbed, but in use they seem to flex with you.

I’ve worn the Orion for mountaineering days; one route had eight full pitches of climbing and lots more scrambling where we kept our harnesses on even though not roping up. After eight or nine hours I’d normally be happy to get my harness off, but that day it was no problem and I’d be happy to wear the Orion for longer if necessary. In the past I’ve found that some well padded harnesses, while comfy to hang in, aren’t the best for walking around in. Likewise, skinny alpine or ski touring harnesses obviously aren’t always great to hang in but the Orion seems to hit a sweet spot: fine to trek around and scramble in but still as good as anything when you need to hang in it for longer periods. So, on comfort, full marks.

My problem with the Orion is the racking. Edelrid calls it an all rounder for “sport climbing and mountaineering”, and in a sense I can see that. The four big racks have loads of room for carry say 16 or 18 quickdraws for big, multi-pitch sports routes. The four racks, in addition to the two tabs to hold ice screw clippers, would probably also hold enough of a mixed rack for alpine climbing, but I immediately took the Orion off to climb multipitch Norwegian granite trad routes. I’ll happily to admit to carrying my courage on my gear loops when I’m trying these sorts of routes at the top of my grade, but I imagine plenty of folk climbing big Gogarth pitches or the monsters out on Pabbay and Mingulay would carry similar amounts of gear.

With double cams, two or three krabs of wires, 10 or 12 quickdraws and two or three torque nuts in addition to prussiks, belay device, nut key and a couple of lockers, I found the Orion’s four racks got too packed. There is a tab at the back which takes a krab holding my prussiks and penknife nicely; I could then clip my belay HMS and ATC to that too but was worried they could twist off. It should be noted that in recent years my main harness has had 7 gear loops, so I accept that - as with the USB plug - personal expectations and preferences are central here. The racking issue will only be an issue if you are not willing to put some gear on a bandolier when doing a big pitch or route. Likewise, if you are one those climbers who set off up multipitch E3s with nowt but ten battered wires, four original rigid Friends and a deeply annoying air of self confidence and ability you’ll have no problems at all!

You can fully undo the leg-loops to put the harness on whilst wearing crampons or skis, but due to the rubber finishing-tabs that protect the ends of the leg-loop tape, this is, frankly, a faff. Nevertheless, these sort of finishing touches along with plastic protector that will stop the belay loop from wearing away on the leg loops, adds to the overall impression of a top quality product, both in terms of design and manufacture.

The Edelrid Orion is a very plush and supportive harness, really one of the best in my experience. Despite the comfort and support it is not particularly heavy. For me, it needed a few more gear loops to deal with the type of rack I want carry on long, sustained trad routes, ironically the very type of climb where the Orion’s comfort and support would really be appreciated. If you think four (good-sized) racks is plenty for you, then I can heartily recommend it, and here’s hoping that Edelrid consider adding a big fifth loop to the back on future versions to keep me happy. Thanks to my climbing partner Dave Smith for allowing me to use his photos in this review.

The Finn harness is my first proper sit-harness and it is more comfy than my old one (a full-body harness - Dad/Toby). I like the harness because it looks nice and it has proper gear loops for me to hang the quickdraws from when I’m seconding.

The harness is comfortable when I have it on and done up, but the waist belt could be a little bit longer to make it easier to loosen to get on. The leg loops are comfy as long as I don’t leave things in my pockets under them!

I have used the harness rock climbing in Wales, Finland and on a big cliff in France, and I did a whole via ferrata wearing it in France. The via ferrata took us about an hour and the harness was comfy for all that time, both when I was hanging in it and just walking in it on the easier bits.

Toby is based in Finland. He describes himself as: "a writer and researcher specialising in international security politics; finally no longer a PhD student; hopeless but enthusiastic climber; part-time gear reviewer; keen multi-role cyclist; idealist and cynic" 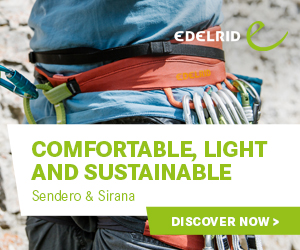 It might have been designed primarily for sport, but as a comfy and versatile all-rounder this is a harness we've struggled to fault.

The Mosquito is the lightest harness that Wild Country has ever made. It's designed to be a super minimal sport climbing harness - so how does it perform in the climbing wall, at the crag, and on routes? Theo Moore finds out.

cyberpunk
14 Nov, 2013
I have been looking for a harness that has 4 gear loops and 1 extra gear loop at the back for prusik,knife etc, ice clippers, and without adjustable leg loops. This combination makes a all round all discipline harness. Does it exist no. But I keep hoping.
HeMa
14 Nov, 2013
*Ryx M270 with DIY backloops...
TobyA
14 Nov, 2013
//www.edelrid.de/en/Edelrid/Sports/Harnesses/Cyrus-oasis.html Four gear racks and the same tab at the back as the Orion I think -that takes a krab that you can clip your extras into. Worth a look?
cyberpunk
14 Nov, 2013
Are they mad making a alpine mixed harness with 2 gear loops.
TobyA
14 Nov, 2013
//www.ukclimbing.com/gear/review.php?id=5228 but plenty of hardcore alpinists use the Petzl hirundos for alpine and I think that only has two racks I think. But the Edelrid one like the Orion but with fixed legs has to be worth a look and surely there are plenty of four or five loop fixed leg harnesses from BD aren't there? Or the Wild Country Boost?
More Comments
Add Comment
Please support the following outdoor retailers who support UKClimbing.com: