Share
Reviewed by Rob Greenwood UKC 8th May, 2015
This has been read 38,677 times
Price: £68Brands: Totem
Share
We receive free products for review from brands, many of whom advertise on the site. We work on strict condition of editorial independence, and no guarantee of endorsement

When I first saw the Totem Cam I recall my reaction being much the same as Andy Kirkpatrick's*: I saw yet another camming device with a vague and irrelevant USP (advertising buzz-word) that would essentially come to nothing more than a bit of hype, with little or no difference to the overall functionality of the product.

Fortunately, upon closer inspection it became immediately apparent that there is something very different, something that makes it stand out from the other cams on the shelf: the design, the quality, the peculiar looking sling (!) and oddest of all (for those with an acute attention to detail) - the absence of a conventional stem.

*to read Andy's Review "One Cam to Rule Them All..." click here

The Totem Cam was brought to the masses when the charming and talented Frenchman, Arnaud Petit, climbed Black Bean (8b) in Ceüse using the devices as his sole means of protection (give or take a nut or two). Whilst I wouldn't necessarily say that this actually adds anything to this review other than a demonstration of their use on limestone - to which they are well suited - it does provide a lighthearted introduction to the product in question and a good illustration of their use. With regards to the brand, Totem are a small cooperative business based in the Basque Country in North West Spain. They produce an exceptionally compact range of specialist products, their namesake Totem Cam and the Basic Cam, both of which were designed, manufactured and tested on site.

The cams do what all cams are designed to do: hold falls. Ignoring all marketing hype this is what the majority of climbers buy camming devices for, so before we go into further detail about their specialist functionality it is probably best that we delve further into how they perform in day-to-day use.

The action of retracting the lobes is smooth and consistent, due to the cam's strong spring this also provides a feeling of security within each placement - they don't seem to walk/move around much. When placing the device one particular feature becomes noticeable: the shape of the lobes. It's unusual. The thought behind this 'bump' shape is that it prevents over-camming and throughout 10+ months of use I cannot think of a single occasion where I have felt the cam to have got 'stuck' (though that's not for a lack of trying!). As we all know, we never intend to over-cam cams - we just get scared then we precede to bash them in, in the quickest and most immediately comforting way we can. Their different shape also means that they fit well where other cams may not.

This is one of the fascinating things about the Totem Cam is that at first glance they appear quite heavy due to the fact that there's quite a lot going on within the device, but in reality they are pretty much exactly the same weight as all other cams on todays market.

Due to the stemless nature of the cam (yes, it is confusing...) it is extremely flexible and therefore versatile in both horizontal and vertical cracks. An additional benefit of this flexibility, coupled with the the strength of the springs mentioned earlier, is that they are very firm within their placement and not at all prone to walking. When you place the cam, that's where it goes and that's where it stays, making it a confidence inspiring piece of gear.

Because the sling opens front on, racking can be a little confusing and righting them within your palm once removed from the gear loop is subtly different from your average camming device. Realistically this was the most awkward aspect of the device to get used to, simply because it seemed counter-intuitive after years (and years, and years...) of doing the opposite. However, after a few trips out you soon get the hang - it just takes a bit of getting used to.

There are two further benefits to the sling, the first being that it has been opened particularly wide to accommodate the thumb. What's more is that this area has been so generously designed so that it will easily accommodate a glove too, something that can be slightly awkward with certain styles of camming device. The second advantage - and I will go into this in greater detail later - is that you can isolate which camming units you are loading (i.e. either left or right).

One thing I was surprised about was that Totem had opted to use T-7075 over the more widely accepted T-6082 that is used amongst many other camming devices these days. The traditional reason for the use of 6082 is that it is a softer compound, hence it has more 'grab' when holding in cracks, but seeing as the Totem Cams have more than enough grab due to their extreme camming angle (up to 40.7º in flared cracks) and direct loading system the use of 6082 would actually have had a negative impact as the cams would have worn out quicker!

In terms of cam width the Totem wins hands down against virtually all it's competitors, in many cases they are up to a lobe narrower. This is usually the point at which reviewers say that they are 'ideal for shot holes', but having climbed for over 10+ years and never found the need to place a cam in a shot hole I will refrain from doing so. What I will say is that it allows many awkward placements, particularly pockets, to be within the realms of possibility where they weren't previously.

All of the above points cover the more conventional aspects of the Totem Cams handling/performance, but the main selling point for them is within their holding power. This is also where things get a lot more technical and when my limited knowledge of physics fails me. For those wishing to understand the exact details - sums and all - there is a technical report on the Totem Website. I've included a screenshot below for the non-physicists to marvel at...

The real difference with Totem Cams comes from their ability to hold within flared and marginal placements due to a blend of their ability to equalise the load onto each lobe independently and also their greater camming angle, which increases from a standard 13º up to 20.35º - 40.7º in flared cracks. The up-shot of this is that they are more likely to hold, the downside is the increase force that could lead to either the rock or cam failing. It's worth mentioning at this point that these are unconventional placements and the Totem Cams aren't going to start breaking flakes off left, right and centre. These are the sorts of placements that you know - when you place them - that deep down, they aren't good! In fact, I foresee the application in this scenario is one that will be tested infrequently in trad climbing and more within super-marginal placements on aid climbs - hence the force will be much, much lower as it is a passive weight.

So what are the benefit to trad climbers? Well, for a climbers such as myself, based in/around the Peak District, we have a LOT of polished limestone on our hands. The count is still out as to whether Stoney or Chudleigh (nr. Exeter) are the contender for Britain's No.1 'Most Polished Crag' (other suggestions welcomed, I gather the vintage at Symmonds Yat is particularly fine) but with polish also comes a friction coefficient so low that it is very difficult for cams to hold in the event of a fall, several accidents have occurred over the years as a result of this. As a result the Totem Cam will hold where others won't, hence they have been my cam of choice on such occasions (and others when placements have been crucial). If you don't believe me, Outside in Hathersage have a good demonstration of this within a flared/polished climbing hold in the shop.

In terms of the concerns that this increased outward force damaging the rock, my argument would be that if you are placing any cam behind a wobbly flake I do not believe that using another brand would make the slightest bit of difference - the result is not going to be good. You should always consider the structural integrity of the rock before placing any piece of gear and with the Totems that is no different; however, if the rock is good then it is the Totem that is most likely to hold.

This is something that is 99% applicable to the aid climbers, with limited application in day-to-day use with trad climbers (unless you're doing something particularly esoteric).

Unfortunately the UKC Gear Testing budget doesn't extend to flights to America, so on this occasion I had to favour Millstone instead of El Capitan...

Having aid climbed before - most notably The Shield on El Cap - I can say that the ability to do this would be worth it's weight in gold - particularly within peg scarred cracks.

Totem Cam is Quality Made. We manufacture the main components and we undertake the entire assembly process. Eight years of product development have provided us with the technical skills to ensure a quality job. Totem Cam is CE certified by Cete Apave Sudeurope (Notified body number 0082).

Rob Greenwood is the Advertising Manager at UKClimbing.com.

He's a passionate climber, hot yoga addict and eater of vegetarian food. He has done more UK trad routes than he's had roast dinners (and that's got nothing to do with the vegetarianism). 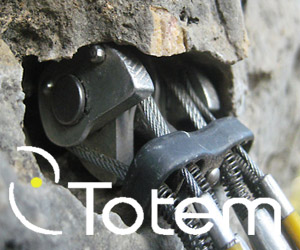 Born from a heart-to-heart with our top trad-climbing BD Athletes Hazel Findlay, Carlo Traversi, Sam Elias, and Babsi Zangerl, the Camalot Z4 is the realization of a dream: to have a single-stem cam that stays rigid in-hand, but flexes once placed....

BD Athlete Alex Honnold has never been a fan of wide cracks, or as he puts it a little more bluntly: "Offwidth climbing sucks". But even Honnold has to thrust his body into deep fissures from time to time: "Many of the most classic routes in the world,...

simes303
8 May, 2015
Sixty Eight quid is really taking the piss for one cam.
planetmarshall
8 May, 2015
I hear there's a more expensive one lodged in Etive Slabs.
SenzuBean
8 May, 2015
£61 here :)http://www.coldmountainkit.com/shop/product/totem-camx
PPP
8 May, 2015
59 :Phttp://www.climbers-shop.com/10897993/products/totem-cams.aspx
SenzuBean
8 May, 2015
CMK have had their store robbed and loads of inventory taken recently - so I try and help 'em out :)
More Comments
Add Comment
Please support the following outdoor retailers who support UKClimbing.com: