Share
Reviewed by Tim Neill 17th August, 2015
This has been read 17,680 times
Price: £10 Single / £55 Set of 6Brands: Wild Country
Share
We receive free products for review from brands, many of whom advertise on the site. We work on strict condition of editorial independence, and no guarantee of endorsement

These arrived with a note saying "I think you'll like them..."

I'm a bit older and ever so slightly cynical. I've been climbing a while I guess and know what I like, so it's tricky to take on board new stuff and move with the times.....however, anything that comes along that might help to keep me climbing as hard and safe as I can I'm all up for giving it a go.

I'm pretty sure the intention wasn't to reinvent the nut, merely compliment what climbers already use and expand the options. Over the past few months these little guys have slowly worked their way onto my rack. At first I couldn't commit. I carried all the nuts I used to, plus these..just in case. Now it's a sensible mix.

The blurb said they're really intuitive to place - I think you've got to look with fresh eyes - but right enough, now they go in all over the place. Every now and again whilst repeating old favourites I've found they've made very marginal placements much less so, and sometimes even bomber. That's ace!

A recent trip to the Peak, climbing on quarried grit cracks and the well loved Stoney Middleton, really sold them. Now I know what older climbers are like... I'm one too. So if you're thinking it was alright back in the day with some stoppers and a MOAC then 'well done' - but these are better, much better.

Any climbs where the placements are a little tired, shallow or flared will really benefit from these new additions. They often bite where the more traditional nuts don't quite as much as you'd like, especially when you can drop the wider side into the back of the crack. They really seem to excel in once pegged cracks and the odd shallow slots found mostly on the limestone and quarried grit. If you're lucky enough to climb where nature has left the protection cracks just a little less conventional they'll expand your options too!

The difference in weight is the real big plus. It's always the first thing that everyone has commented on. When you grab a set in one hand and the equivalent traditional set in the other you'll see what I mean. How much you have to carry up a pitch, or how far you have to carry it to the climb clearly makes a big difference..you can lose weight, carry less or with incredible will power do both and reap the benefits.....or exchange some of your rack for a few of these...simpler and a step forward.

Of course as with all new light weight climbing gear there's a compromise to be had. That being strength and durability.

The strength rating for these Superlight Offsets may come as a small surprise. Considering the bigger size of placements your getting, you'll have the rating of a much smaller traditional shaped nut. That being said they're still well strong and should be placed with all the considerations that an experienced trad climber will normally judge. As alien as it might be to most climbers, it's useful in this instance to read the info on the swage and check out a comparison by visiting the detailed WC website. All the tech info there is in an easy to review format. Be informed.

I don't really know yet, but so far so good all things considered.

Having used the older single strand Superlights for a few years I'm well aware that they don't survive being aggressively ripped out by the second...the single strand of wire soon bends and frays.

It's obvious that these new products will be much more durable as the wire is doubled in the way we're used to, however the wire is much thinner and so I'd expect it to last somewhere between Superlights and regular rocks. Like looking after micro wires and more recently super lights, I'm going to take a little bit more care with these offsets and of course check for damage a little more often - no big deal.

Over the past few years I've tried a few other brands of offsets. As a general rule, whilst they all go in quite well (good for the leader) they seem to have an annoying habit of staying in (not so cool for the hapless second). As well as being a negative factor for a second's enjoyment factor, clipping in situ jammed offsets is only handy in the short term until they rust.....I've got plenty gathering dust that I've spent time removing from my local crags.... And whilst I have an open mind about most new kit, up until now I haven't made a habit of using any offsets. However, Wild Country seem to have over come this problem with a few more curves and less sharp edges...and so far the ones I've used don't seem to be any more of a problem than traditional shaped nuts, and they're still on my harness and not stuck in the crag! 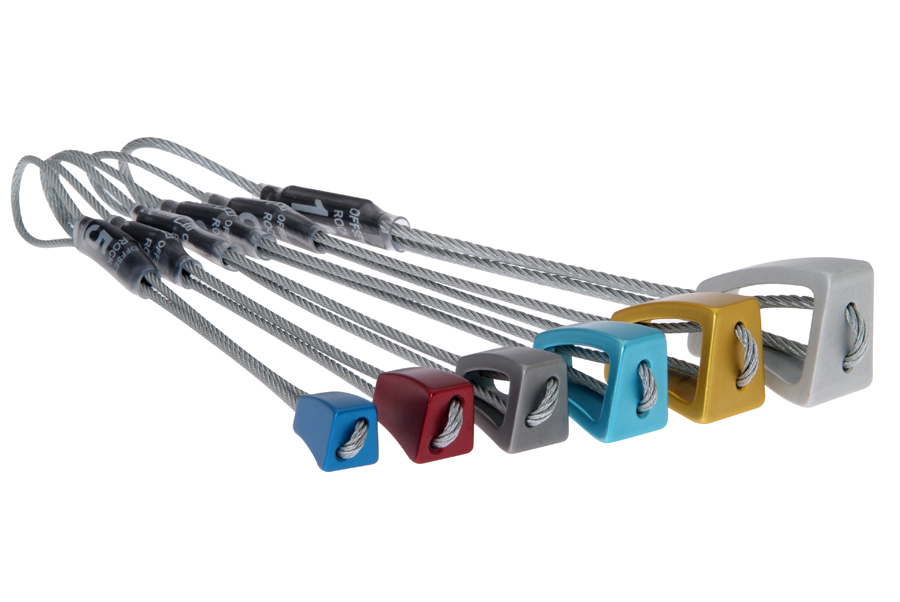 As a final aside, a number of gifted and talented friends who receive climbing equipment in lieu of their ambassadorship for brands other than WC carry these super light offsets too..which means they've actually bought them! If you know some of these North Wales legends this is quite a big deal....clearly advocating their worth as must have hardware.

Wild Country have made some good improvements on what's been available up until now. If you're a committed trad climber, keen to keep yourself as safe as you can, don't bury your head in the sand...get some of these on your rack.

Tim Neill is a fully qualified British Mountain Guide (UIAGM) and is based near Llanberis. He is often found working on his home crags of North Wales where he has climbed more routes than anyone else we know. He spends much of the winter working in Scotland and some of the summer working in the Alps.

Tim has been climbing for many years with ascents of hundreds of classic routes across the world (including some hard ones!), including an early repeat of the stunning ice climb Super Domo in Patagonia with James McHaffie (see photo and UKC News).

Making Friends Since 1977 – The Heritage of Wild Country

The story of Wild Country is the story of two strong-minded and visionary individuals from totally different backgrounds, but who shared a common passion. It was a chance meeting between two climbers in the summer of 1972, one...

Friends are the most iconic protection ever made. Wild Country is now introducing the new Offset Zeros – the ultimate weapon for wild climbing adventures and thin flared cracks. With among the narrowest head widths on the market and...

Born from a heart-to-heart with our top trad-climbing BD Athletes Hazel Findlay, Carlo Traversi, Sam Elias, and Babsi Zangerl, the Camalot Z4 is the realization of a dream: to have a single-stem cam that stays rigid in-hand, but flexes once placed. Behold—the...

JamieSparkes
17 Aug, 2015
I had a similar experience, they certainly take a while to get used to and commit to placing the damn things. Only thing I find odd is why they are not a size larger to complement the single strand superlights.
Owen W-G
17 Aug, 2015
I've must've placed 1000s of bomber nuts in my life but I never seem to place a good offset.
BarrySW19
18 Aug, 2015
Strange, I've had plenty of times where I've put in a dodgy looking nut then replaced it with the same size DMM offset and it's been bomber. The main reason I probably won't bother with these is the rating - given that they're rated pretty close to the force of a leader fall already means that the slightest wear would mean retiring them.
TobyA
18 Aug, 2015
Do you (or me) really regularly generate forces close to those strength ratings in falls? Wild Country seem not to think so...
CurlyStevo
18 Aug, 2015
Have you read this?https://www.thebmc.co.uk/ae-microwire-failure "All this shows that in a significant fall (fall-factor 0.5 or above), where the belayer is making a serious effort to hold the fall, the force on the top runner is likely to be between 6 and 7kN. For a climber to feel confident that their runners will hold without breaking, they should have a minimum strength of 7kN. And even this does not guarantee security, since higher forces can be generated in some high friction situations. " IMO climbing protection really needs to not only be strong enough to hold low factor falls but also occasionally really high factor falls (or perhaps high friction). Sure when the gear is so small that its not really feasible to make it stronger I'll happily sacrifice the strength, but for me in general this minimal weight saving in the of general uk trad climbing, doesn't add up in the case of the super lights.
More Comments
Add Comment
Loading Notifications...
Facebook Twitter Copy Email