British brand Anatom entered the market over two decades ago, but this is the first time I've tried them. I've always assumed their emphasis to be on comfort and affordability over high-end technical performance, and it's probably fair to say that you won't see their boots on the feet of many serious mountain types. But surprisingly (to me, at least) their range does extend to a B3 winter model - and it doesn't look half bad. Perhaps it's time I adjusted my preconceptions.

But my first encounter with Anatom has been at the other end of the scale. The new V2 Suilven is a light summer hiking boot that's well suited to less demanding UK hillwalking. I'd consider using it on boggier mountain crag approaches too. And while it's not explicitly designed for scrambling or via ferrata, you could certainly take it on easier hands-on routes.

As a gear editor I am routinely sent top-end stuff, with price tags to match, and while that's jolly nice for me the risk is that I come to look down on more affordable alternatives. Here's a perfect example of why that would be wrong.

There's nothing particularly special or ground breaking about the V2 Suilven, but it does the basic job of being a walking boot very well: It's comfy straight out of the box, yet supportive enough for its intended use; it's reasonably cool on warm days; it sports a midsole that soaks up the impact on harder surfaces, and an outsole with a decent grip on soft, wet ground; and it comes at a price that won't induce a coronary... in short, I struggle to fault it at this budget.

I liked them as soon as I put them on, and more so after my first full day out in them. For a non-techy, all-round summer walking boot, I'm not sure why you'd need to pay more.

On the kitchen scales I make it 1204g for my size 47 pair (footbeds included) - not an ultralight weight perhaps, but not half bad for the boot you're getting. We haven't reviewed many (or any) similar boots in the recent past with which to compare them, but they're certainly lighter than typical more supportive 3-season leather footwear (as you'd hope!) and they really don't feel heavy or clumpy on the feet.

This boot comes in both a men's and a lower volume 'women's' fit.

Volume seems about middle of the road in the men's Suilven; I've been adding an extra pair of Superfeet insoles to soak up some of the depth, but with thicker socks on I don't really need them. The footbed supplied is unstructured and floppy - as you'll also find with boots twice this price - but it is quite thick and spongy compared to some, which can't hurt in terms of comfort.

These boots are on the wider side, but not madly so. Crucially, for me, there's plenty of width in the forefoot, and the toe isn't too aggressively curved, so if your feet are similarly broad at the front then you may get on well with Anatom's 'comfort last'.

Despite not having a particularly structured heel cup, I've found the boot holds my heel in place snugly and firmly, with no danger of lift at the back. The ankle cuff is about mid height, with a low cut-out at the rear to take pressure off the achilles, and a reasonable depth of padding to provide sufficient support and comfort without really limiting the range of movement. The padded cuff is nice and breathable.

Overall I find these boots really comfy and forgiving on the foot, and even after a long day I've not been desperate to take them off. Their lightness and softness obviously help in this regard, but I think the 'comfort last' is doing its job too. For me, they just fit really well, with no rubbing or pinching. The usual caveat obviously applies: everyone's feet are different, so what works for one user won't necessarily suit the next. Always try boots on before buying!

With a mix of suede and tough polyester fabric, the uppers feel well made; but the amount of stitching here, and the lack of an all-round rand, don't suggest a boot designed for loads of hard abuse. To help protect against the knocks, you do get a small rubber toe cap. Overall it's quite a soft upper, less supportive than a heavier boot but as a result more forgiving on the foot. How will it last? I'll have to report back later.

A waterproof lining provides the weather protection. This is a microporous membrane that Anatom call Tri.aria, and while it's not one I'd heard of before, and certainly not a big name brand, I'm still mildly impressed. These boots are sufficiently waterproof for use in Britain's soggy hills, but they also feel breathable enough that you don't seem to end up with ridiculously sweaty feet. For summer use I do still think that an unlined leather boot will always beat a waterproof-lined fabric one for breathability, but having worn the Suilven on a couple of warm sunny days now, without things getting unpleasant, I'd give Tri.aria a bit of a thumbs up. I've no idea how this membrane performs in a lab versus its obvious rivals, but on this particular boot it seems to work well enough.

The V2 Suilven is a light and fairly bendy boot, and that's not a category of footwear I spend much time in. Typically, depending on conditions and terrain, I'd either wear a heavier, stiffer leather boot, or a softer, lighter shoe. The springy forefoot flex and relative torsional bendiness on offer here do feel more shoe-like than the boots I'd tend to wear - indeed I've got stiffer approach shoes. But on the right day, I really like it. I'd argue that a relatively soft and flexible sole isn't a bad thing in the appropriate context, and so long as you're using the Suilven on predominantly gentler mountain terrain then in fact it's an advantage. Since the foot is freer to flex, you're not clomping along getting tired and uncomfortable. You could almost run in these - not that you would. The Suilven does have obvious limits though, and it's clearly not a good match for scree, really steep/rough ground, more technical scrambling or snow.

A Vibram outsole gives a confidence inspiring grip on the usual UK range of terrain from wet grass and mud to rock. It's got a decent chunky tread for traction in softer ground, and a nice pronounced heel breast for downhill braking. For general UK summer walking I think it's a decent outsole.

The PU midsole gives a lot of cushioning too, soaking up plenty of shock on harder surfaces like farm tracks and tarmac. I can see myself wearing these happily on something like the West Highland Way, a multi-day walk largely on easy hard-packed ground. There aren't many boots that I'd say that about - I'd usually choose shoes for long easy days.

Soft and forgiving on the foot, but with a proper grippy sole, the V2 Suilven is a really good lightweight boot at a price you just can't argue with. For summer in the hills, low level rambles year-round, or even soggy approaches to mountain crags, it has obvious advantages over a shoe in terms of waterproofness and support, but without weighing loads more. It's my first experience of Anatom footwear, and on the strength of this example I'd be keen to review more in future.

The new V2 Suilven Men's Light Hiking Boot is lighter and more cushioned than before but with the same ankle support and designed with the level 2 Anaflex midsole. The Vibram outsole with the addition of the PU midsole provides excellent grip and shock absorption. All of this is combined with the Tri.Aria membrane system for waterproofness and breathability so, whether you're trekking or light-hiking the new V2 offers the best balance of lightness, comfort and performance. 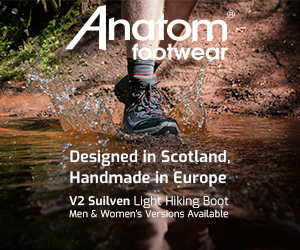 "A non-techy walking boot that can eat the miles without chewing your feet up too, the R-Evo is built for comfort" reckons Dan Bailey...

The Breithorn's claim to fame is its affordability. So are they good enough to justify not spending more on a higher end walking boot? For some people yes, says Dan Bailey, but for others definitely no. It all depends what you want to do in them...

Best boots for alpine summer and...

They're no lightweights, but the Vultur Vertical GTX are superb solid B3 boots, which combine warmth, comfort and technical performance, says Dan Bailey.

"A non-techy walking boot that can eat the miles without chewing your feet up too, the R-Evo is built for comfort" reckons Dan Bailey...

If you want a versatile B2 boot for scrambling and high mountain via ferrata as well as summer Alpine routes and Scottish winter...

The Breithorn's claim to fame is its affordability. So are they good enough to justify not spending more on a higher end walking boot? For...

The Veloce GTX from Dolomite is aimed at mid-altitude summer mountaineering, via ferrata and approaches over hard terrain. It has an...

With a lightweight upper and an excellent balance of support and nimble-footedness, the Trango Tower Extreme GTX are superb...

All Round B1-B2 Mountain Boots