Share
Reviewed by Si 13th December, 2016
This has been read 10,762 times
Price: £34.95Brands: Rockfax
Share
We receive free products for review from brands, many of whom advertise on the site. We work on strict condition of editorial independence, and no guarantee of endorsement

The Chamonix Rockfax was published in early October. We sent a copy to Simon Verspeak to get his opinion on the book and he has written this short review. The book is published by UKC's sister company Rockfax. Simon was under no obligation to offer positive feedback - all views are his own!

More information about the book, and order it online

Chamonix, place of mountain dreams. Probably the one area nearly every mountaineer has been, or aspires to go. Nowhere else on earth has such serious terrain as accessible as this, thanks to the lifts of the Compagnie de Mont Blanc. The valley has the highest peak in the European Alps and probably the highest concentration of Brits as well!

"Flicking through this book, I am regaled with good memories and most importantly further inspired to go back for more"

Thanks to its popularity as a destination it also has a large number of guidebooks, many originally written in French and translated into English. Between them, these books may span the range of different types of climbing available - rock, ice, mixed plus mountaineering and skiing - but none cover all disciplines within a single volume. In fact, not since the release of the Alpine Club guides in the early 1990s have mountain and rock routes been bought together in one text. The AC guides however are now outdated, and they certainly don't have anything like the sort of detail to be found in this new Rockfax guide. Climbing of all styles is covered here, from mountain rock to modern mixed, classic grande courses to valley bolt clipping, and of course the popular voie normales.

Although this is a select guide the authors have thought carefully about what to include, picking a good variety of routes and avoiding others that, despite their classic status, are now no longer ideal choices due to objective dangers such as glacial retreat or poor rock.

I feel reasonably well qualified to write about this book, having lived in the valley for several seasons and having ticked a good third of the top fifty over the past 10 or so years. Flicking through I am regaled with good memories and most importantly further inspired to go back for more (which is always a reassuring sign).

The guide is cleverly split up into sections: mountain routes first, then a dedicated section for sport climbing. The mountain routes are laid out logically by geographical area, starting at the top of the valley and moving westwards, finishing with the Aiguilles Rouges. The inclusion of sport climbing is an added bonus for those who want something more active on their rest days, or for escaping the bad weather up high.

For the first timer and the long-term resident or old hand alike, there are plenty of options and some very useful information about logistics and the necessary skills. Thankfully Chamonix has a brilliant public transport system allowing a visit to be made without a car, and this combined with easy access from Geneva makes it a good choice for a quick hit. Since the range of grades and styles varies hugely across the massif from easy/accessible to hard/committing it's undoubtedly a place you'll return to again and again and again - and with its wide ranging coverage this book has plenty of space to grow into.


Within the guide there are clear maps, very inspirational photos (although there is the occasional poor one here or there), and a great many highly detailed topos. The only gripe I had with the topos was with some of the bigger, longer routes. The level of detail here is inevitably very zoomed out, so though they set the routes in context the topos are probably less helpful when actually on the route. But maybe it's good to leave some adventure in?!


As in other Rockfax guides the symbols are standardized; I really like the one axe or two axe symbol, but it would be good if the trad/fully bolted/mixed gear symbol had been included too for easy rack planning reference. Good seasonal information in the crags quick info boxes helps with getting things in at the right time. While this is not specifically a skiing guide it does include some info on ski approaches which is definitely useful, as many of the routes included do get climbed this way, especially in the spring. Personally I'd have liked the top 50 at the front of the book like other Rockfax guides.

One of the issues with this book is its size; it may be great for valley cragging but this is not a book you could carry in to a remote area or up a mountain route. The trick here would be to photo the relevant section on your phone before you go. Or better yet, download the Chamonix pages on the Rockfax app. The upside of its size however is that Rockfax Chamonix is a perfect tool both for pre-trip planning, and just plain inspiraiton. If you were to buy one guide to get motivated by, this is it.

Simon is a super keen climber, skier and mountaineer who works full time as a mountain instructor. He runs the small business of OranjeBergsport, providing bespoke skills for mountain adventuring and also freelances for a number of bigger organisations such as the Miltary and Jagged Globe. He is nominally based in North Wales, but also works in the Peak, Scotland and worldwide on expeditions. 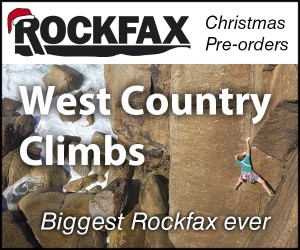 As the long wet winter approaches, psyche is something that it's good to have in abundance. This lavish guide to the best grit bouldering across six counties should inspire even the most jaded, says Rob Greenwood.

saintlade
14 Dec, 2016
Nice review!
nb
16 Dec, 2016
Well of course, Rockfax subsidises UKC!
Simon4
17 Dec, 2016
Well I haven't seen the guide, but the sample pictures here look great. Really good at giving you that so important, and so hard to find "overview" of the situation to give context to the mountains, the routes, the huts and lifts and their relation to one another. Guides have got vastly better in 20-30 years, a great pity this wasn't available then, might have saved quite a lot of confusion and epics. On the other hand, perhaps a bit of adventure and exploration would have been taken away as well.
67hours
20 Dec, 2016
Looks like a great book, can't see why you'd go to Chamonix without it. I also think its a good review, because it must be hard when asked to review a product launched by the company publishing the review. Good work Simon.
zimpara
23 Dec, 2016
This needs someone educated to review it on youtube!
More Comments
Add Comment

In this review southwest climber and boulder Dave Henderson takes a look at the new Dorset Bouldering Rockfax guidebook which has been put together by Ben Stokes, and published by UKC's sister company ROCKFAX.

In this review UKC regular Tom Ripley takes a look at the new Dolomites guide, written by fellow UKC regular...