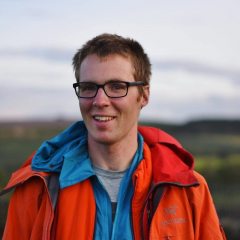 Reviewed by Tom Ripley17th September, 2014
This has been read 19,476 times
Brands: Rockfax

Rockfax have done it again! Their new guide to the Dolomites is fantastic. The Dollies are one of the traditional alpine areas but in recent years they seem to have fallen slightly out of vogue and are off the radar for many younger climbers. This really isn't surprising when you look at the other guidebooks that are easily available in the UK - 1990s guides with black and white pictures and line drawings hardly create the impetus to book flights.

I predict James Rushforth's new guide will change this. James is an extremely talented climber and photographer and the book is a real showcase for his images, with stunning action photographs and photo topos that show off the beauty of the area throughout. James Rushford has lived and climbed in the Dolomites for many years and his in depth local knowledge of the area shines though in the guidebook.

In many ways the book is a travel guide almost as much as it is a climbing guide. The first 67 pages of the guide contain concise information detailing everything a first-time visitor needs to know about the area: when to visit; how to get there; where to stay; where to buy food; a directory of alpine huts; what to do in an emergency; activities to do other than climbing; what gear you need to take; expected weather conditions and an introduction to local culture. As well as a section on the history of climbing in the Dolomites, including a fascinating explanation of the development of via ferrata during the Great War. There is also a really interesting couple of pages that succinctly explain the geology of the area, and even introduce the beautiful alpine flowers that cover the meadows beneath the crags and towers. I found the introduction to the excellent road and mountain biking the Dollies offer particularly useful for helping to persuade my bike mad other half that the Dolomites is a worthy holiday destination!

The layout is excellent and the guide book is a pleasure to use. The guide does everything climbers have come to expect from Rockfax with detailed written descriptions and accurate photo-topos for every climb and via ferrata described. Every crag has both a map and a written description so climbers can easily find their way to the base of the routes. Routes are always described from left to right. Route descriptions are always on the same page as their respective topos and page turning is never required to finish reading a route's description - a simple practicality that other publisher don't seem to have quite realized.

Some of the longer routes, like the twenty-plus pitch monsters on the Marmolada, have their topos split across a double page spread. This is really helpful as it means the topo isn't too small and it is still possible for the climber to pick out as much detail as possible from it. The unbroken line of route is still always shown in the crag overview. A really helpful addition is the addition of colour coded pitch grades on topos. This first appeared in 2013 Costa Blanca Rockfax guide, but it really comes to prominence in The Dolomites book owing to the number of long multi-pitch climbs. The colour-coding allows climbers to see at a glance the rough difficulty of each pitch and gauge how sustained a route is. This is really helpful when planning who will lead which pitches on a long route. For multi-pitch climbs, and via ferratas, there is also a symbol that roughly estimates the time of approach and the time of ascent for a competent party - again very handy for route planning.

The book includes descriptions of over forty classic via ferratas in the area. 'Via ferrata' - which literally translates as 'iron road', originated in the Dolomites. Iron rungs and cables are used to protect terrain which ranges from very exposed walking and scrambling, right through to quite technical climbing on the hardest VFs. As well as describing many of the classic VFs, Rockfax introduces via ferrata, briefly explains how to do it, goes through much of the equipment required and concisely explains they way VFs are graded. I found this bit really helpful because, as a first-time visitor to the area, I was not familiar with via ferrata and the techniques involved

Alongside describing via ferratas and longer traditional and bolted routes, the guide book also details a number of superb single pitch valley sport climbing areas. Whilst the sport climbing in the Dolomites probably isn't worthy of a trip in its own right, descriptions of cragging areas are very useful for when the weather isn't good enough to head onto the big faces or for those seeking a bit of active rest. The sport areas are described in the well established Rockfax style that many climbers will be familiar with.

A few minor criticisms. First the lack of a Top 50. I know this feature has been said to only increase the traffic on certain already-popular routes, I have found them really helpful as a first-time visitor to a new area. Also, there is no conversion table 'guestimatin'g the UK trad grades of the most popular routes. The climbing style in the Dolomites is very similar to climbing in UK, but as a first time visitor unfamiliar with UIAA system I would have found a specific route conversion table extremely helpful. Another minor niggle is the size of the book: it's a bit of a whooper, far too big to lug up the Marmolada really. However this is easily solved by either taking photos on either your camera or smartphone, or sneakily using your employer's photocopier to make copies of the routes you want to climb.

The book describes most routes that the majority of climbers will want to climb. From the Falzareo Tower right through to Bellavista. The only notable emission that I noticed was the Phillip-Flamm on Civetta. While I accept that this sort of multi-day adventure choss isn't really fashionable presently I am a firm believer that if you don't describe these climbs they never will be and they will drift into obscurity.

In conclusion, this is a brilliant book. It presents a lifetime's worth of climbing and via ferrata to one of Europe's premier rock climbing destinations in the aesthetic and very usable Rockfax style. I predict that it will bring the Dolomites back to the forefront of UK and international climber's attentions, just like Rockfax's 2008 Lofoten guide did to that area. While there are a plethora of other guides to the area I predict that this book will fast become the 'go to' guidebook for visiting climbers and will be a huge success for Rockfax. Congratulations to James Rushforth, all the hard work he's put in has really paid off and the resulting publication is truly superb.

To finish, here are a selection of the photographs included in the guidebook. This set are all taken from James Rushforth's UKC gallery, although many other photographers also contributed to the guidebook.

Tom Ripley likes to climb whenever he can. He is originally from Cumbria and learned to climb there. He spent four years living in North Wales before moving to Sheffield last year. Tom enjoys all aspects of climbing but is happy to admit that he isn't particularly good at any of them. His guidebook collection spans four continents and has its own bookshelf.
About the Reviewer:

Tom Ripley has been climbing for over fifteen years in both the UK and abroad: personal highlights include an ascent of Denali's Cassin Ridge and first ascents in Patagonia and Peru. Tom is dedicated to sharing his obsession for all types of climbing through his work as a climbing instructor and guide.

Currently, Tom is part way through the British Mountain Guides' rigorous training scheme. And, as a trainee guide, he is qualified to guide and instruct rock climbing and mountaineering throughout the UK.

Whether you are interested in making the transition from indoor climbing to real rock, working towards your first lead climbs, gaining self-rescue skills, or climbing a classic route that has so far eluded you, Tom can help you achieve your goal. Staying safe, patience and adventure are always a priority. He can be contacted through his UKC profile.

Is New Zealand via ferrata a... List more discussions...

Alessandro Tentori
17 Sep, 2014
A comprehensive Dolomites guidebook would constitute a monumental work, but some masterpieces of historical relevance are definitely lacking from this book...who is gonna climb Italia61 at virtually unbolted 8b anyway? Also, Reinhold Messner is not Tyrolean (Tyrol being an Austrian Bundesland), but Italian. Other than that, I really liked going through the excellent pictures.
drolex
17 Sep, 2014
https://en.wikipedia.org/wiki/South_Tyrol#Name Also: "Reinhold Messner, 1944 in Südtirol geboren..." from http://www.reinhold-messner.de/de/vita/lebenslauf/biografie.html
beardy mike
17 Sep, 2014
Merano is South tyrol. He is Tyrolean. As for lacking - i have yet to see a book of the dolomites in which all the routes are the very best or even historically relevant, or even fully comprehensive, bar the CAI guides which cost as much as this guide for a single mountain - not really an option. At some point a guide writer has to decide what to put in and what to leave out. Not an easy decision.
James Oswald
17 Sep, 2014
I'm guessing this is a full size guidebook which won't fit in a normal sized pocket?
Chris Craggs
17 Sep, 2014
It is almost "Full Sized +' at over 500 pages, Chris
More Comments
Add Comment

The Chamonix Rockfax was published in early October. We sent a copy to Simon Verspeak to get his opinion on the book, and he has written us this short review.

In this review southwest climber and boulder Dave Henderson takes a look at the new Dorset Bouldering Rockfax guidebook which has been...