Share
Reviewed by Rob Greenwood UKC 28th October, 2022
This has been read 2,975 times
Price: £25Brands: Vertebrate Publishing
Share
We receive free products for review from brands, many of whom advertise on the site. We work on strict condition of editorial independence, and no guarantee of endorsement

Psyche is something that's helpful to have in abundance, particularly in the UK where bagfuls of it are often required to get you through extended spells of shite weather. As a result of this, books such as Grit Blocs are a wise investment coming into the winter, because they'll lift the long (and often wet) nights and help to put those painful fingerboard sessions into perspective.

Grit Blocs features '100 of the finest problems on Pennine Gritstone', which must have been quite a stressful list to compile for its author - Dave Parry - as there's a lot of problems you could potentially include, spread across many different areas. The book features (to use the old school moniker) 'boulder problems' from across six counties - Northumberland, County Durham, Lancashire, Yorkshire, Derbyshire and Staffordshire. It would have been easy to make something highly Peak-centric, but it's nice to see a wider area featured and celebrated, as it makes for a much better book. The breadth of coverage may also encourage people to tear themselves away from the familiar and head somewhere slightly different.

The other interesting thing about the book is that it doesn't always include the problems you'd expect. Yes, there's a whole bunch of the classics, but alongside these are some obscurities and recent additions which look like they deserve the attention. I've absolutely no doubt that some will question what has and hasn't been included, but as we always say, surely part of the fun about books like this is debating what's made the cut.

A curveball or two is arguably in the author's interest, as it'll get people talking, and this works both ways. For instance, I was delighted to see The High Road (f3+) at Stanage included, as I've always felt it to be a massively underrated problem and a highly joyful experience to climb, but on the flipside I couldn't believe Phoenix wall (f7B+) was included, as I thought it was - in a word - crap. I've no doubt that there'd be an article to write on what Dave didn't get around to including and who knows, maybe we'll publish one, as it'd be interesting to hear the dilemmas he had along the way to publishing the book. No doubt he had some sleepless nights thinking about it!

Amongst the 100 problems are a whole load of bonus problems, as each chapter tends to feature photographs of other problems alongside the main one that it's focused on. Sometimes this can lead to a bit of confusion, particularly where the main photograph isn't of the problem that the chapter is actually about (e.g. the DIY chapter's main photograph is actually of Deliverance, which just looks a bit odd). This isn't the end of the world, but feels a bit counter-intuitive. Another quirk is that none of these other problems feature grades alongside them. I'm not sure whether this is a conscious decision in order not to make the book too grade-centric, but it would have been really useful to have the grades displayed, simply so that when you're scanning through you know whether or not you might be able to climb it.

Grade-wise the book has problems from 3+ to 8B, but it's weighted towards the harder end, with more 7s and 8s than there are 5s and 6s. Given that there's a significantly greater number of people operating in the lower echelons I'd question that split, as much of Grit Blocs is out of reach to the more casual climber. However, there is obviously a large element of the aspirational to it, because whilst people may not be able to climb these grades they may still be interested in the stories and photography that come alongside them.

On that note, Dave's writing is something I have always enjoyed, not least because of his exceptionally dry sense of humour. His 'Climbing Gossip' column in the BMC Peak Area Newsletter was a thing of legend and frequently brought about genuine laugh out loud moments. Grit Blocs is cut from a similar cloth and makes a highly entertaining read.

Grit Blocs has definitely got me psyched for the gritstone bouldering season. Here's a few places and problems that the guide has particularly piqued my interest in:

As you can probably tell, I absolutely loved Grit Blocs. While it includes a whole host of problems I'll likely never climb, that hasn't stopped me enjoying reading about them, not least because of Dave's unique dry writing style. The breadth and range of the coverage encourages you to explores places you might not have otherwise thought about, which is something I'd encourage all climbers to do - not least because there's so much good climbing out there. The only caveat I'd offer is that due to the way in which the grades are weighted, there's going to be less that's of direct relevance if you're operating in the 5s and 6s than if you're up there in the 7s and 8s. All-in-all though, this is a model that I'd love to see Vertebrate extend to other areas across the UK, as it'd be great to see each showcased within a book such as this.

If you're psyched, sign up to the Ticklist below:

Login as Existing User to subscribe, which will show the climbs you've already ticked. 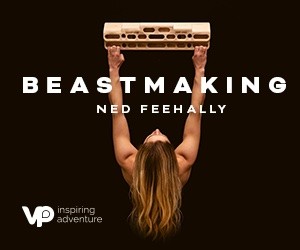 Available now, Scottish Wild Country Backpacking is a celebration of Scotland's wild places and ideal for experienced and self-reliant adventurers. Containing one single-day route, other routes range from between 2 to 4 days - making for a great weekend...

As per the idea outlined within the review, I'm going to follow-up with Dave to see if we can get an article written on the problems/places that didn't make it into the book.

In the meanwhile, what problems would everyone else have liked to see included that weren't?

Answers on the back of a postcard...or perhaps more conveniently, this thread...

Frankly I don't care if I can't climb most of the problems, in the same way I can enjoy great tales on high mountains or hard routes that I will never climb. It's a book of love expressed wonderfully in words and images: a shared devotion to gritstone 'poetry'.

On an endless day, a victorious day, rebuff the bouldering artist.

One could argue from the beginning of UK graded bouldering, since UK tech grades came from font, via southern sandstone.

I'm going to call them Bloches

Tasmania has some of the best and most diverse rock climbing in Australia, if not the world, and this...

The Culm Coast and Baggy Point

"This was the guidebook I was most looking forward to seeing this year" says Rob Greenwood, "and it excelled my highest...

Thanks to the pace of development, quality and sheer quantity of bouldering in North Wales, the third edition of this...

A guidebook should inform, educate and entertain, says Rob Greenwood, and Franco Cookson's guide to the North Yorks Moors does each in...

The Munros - the definitive new hill guide from the SMC

The Great Sea Cliffs of Scotland

Day Walks in the Cairngorms